New bits to add for today's update:
High nitrate / nitrite levels in both the outdoor fish and turtle tanks. My error, working to correct. I have plants in the fish pond to help, and I have four bubblers going and a bubbling fountain. I treated it with some junk from the pet store... while I was there buying it and testing my water, one of the friendly salespeople said, "Oh hey, did you see the two huge koi someone dropped off?" They know I have the room so they let me have two seven-inch (not including tail) koi and one large goldfish. (Yes, I kept them out until I verified the nitrate issue was fixed / nearly fixed. It's a whole lot better tonight.)

And then I went to my friend's house to collect her two turtle pals and her four four-year-old goldfish.
I'm not putting the turtles into the tank until I fix the issue that I had earlier but I do have one very large female and one smallish male (both with orange stripes on their heads!) in an empty 30 gallon tank in my living room.

The fish are HUGE. I mean, I thought I had big fish. Nope, these are three times the size of mine. And they let you pick them up. WEIRD. They are named Turtle Food 1, 2, 3, & 4. I've named the new koi Lucky and Creamsicle and the large goldfish Frank.

Now to fix the disaster I started in my turtle pond.

Oh, the new turtles' names are Ike and Tina. Pictures to follow as soon as I am not so tired.
Posted by Jenny at 9:50 PM No comments:


Update:
Changed Baby Timmy's basking area to his old dock and he seems much happier now.
Took the ramp that was Baby Timmy's old dock out of the Musketurtles' tank and gave them some eggcrate. They have all been up on top and they get up a lot easier now.
Mollies are all pregnant except the boy (duh). Snails are reproducing like snails. Started with one, now have over 9000. (Actually probably close to 300 but that's a lot from one.)
Brought in some plants / plant clippings. Accidentally scooped up a baby mosquitofish so that one went in with the Mollies for now.
All the turtles are scarfing the latest bunch of dandelion greens. I might make it a point to pick the neighbors' weeds this coming spring just to harvest enough to keep from spending $3 a bunch.
Baby Timmy ate a fly.
I put pond lights into the fish pond and it looks GREAT. Wish the water was a little clearer but my husband misinterpreted my directions for feeding them and ended up overfeeding for two or three days. It'll go away with more filtration and less feeding, I figure. The little fountain makes the water just fine and nobody is gasping at the surface. I also put in more fake plants and it looks really cool, especially now with the lights.
Sheldon's been doing turtle jazz hands at Morkie. I just know he's going to show somebody his willie and I'm going to see it and be forever traumatized.
Big Timmy's been relentless with his fluttering at Betty this week. When I feed them, I have to shove him away with a stick or she can't eat. She is having none of it, though, and simply steps on his head and moves him out of her way. He comes back immediately, though.
I'm thinking I want to bring Betty in for some hardcore basking to get rid of those retained scutes. I have a box made up and an area I can wall off so she'll have plenty of room. I can poke at the spots on her shell and move the air pockets, but that makes me worry she'll get fungus or something in them, you know?
I think my goldfish might be about to lay eggs. I think that Poseidon the Pleco might eat them all though.
That's probably it for updates.
Posted by Jenny at 6:20 PM No comments:


The three littlest turtles outside in the turtle pond weren't basking on the new basking area shelf. I hadn't seen them for a week (since I had moved them from the fish pond), so, on Friday, I waded in and pulled them out. I dry-docked them in a container to make sure their shells were ok, which they were, and then I set about making a place for them inside the house for the time being until I could build them a separate basking area out in the other pond.

Found out Mork is a girl and Shelly is a boy. So now it's Sheldon and Morkie.

Sheldon, Morkie, and Mindy are all in the 55 gallon tank. Bit of an underpowered filter for the 50-ish gallons of water in there, but the heater is 200W, the temperature 74-78 depending on proximity to the heater, and I'll be doing water changes on the weekends and netting and cleaning daily. I may actually end up doing water changes twice a week. I don't intend on them staying there for too long, though.

The ATBA was a success after three constructions of it. I just need to get the eggcrate ramp attached; I used Baby Timmy's old Zoo Med dock as a ramp and it's working just fine so long as they all don't try to get up it at once because then it gets knocked askew and everybody falls off. The temp is just about 90 and the lights are separate from the basking area in case something were to happen to the cord - nothing would come crashing down to set anyone on fire.

Each shell looks good, even though Sheldon's is a little sketchy. He just needs to shed. But I knew that already.

I think Baby Timmy needs a tiny ramp too. He hasn't been on his floating lily pad all day, but I saw him hanging onto it. I'll wait until tomorrow to see if he was just adjusting to the new environment.

The harem of mollies went into the 10 gallon tank with the pretty rock filter, and it's right on our kitchen counter, so we have something to look at while doing the dishes. They have a little house / cave under the filter (I needed to raise it up so I took apart Castillo de Timmy to use for a base) and all the plastic pond plants. They've already eaten all the snail egg sacs but there are a dozen other snails to keep them company.

The Three Musketurtles got an apology shrimp and a blueberry each along with their greens today. I've never seen turtles fight over food but they sure did today over those shrimp. I'm rethinking ever giving them shrimp again despite the entertainment factor. I gave the outside turtles (the big ones) shrimp too and I had three of the five eat it right out of my hand.  Amazing.

But occasionally it takes a while.

I wanted tank plants for my fish pond, so I was looking around on eBay. Found some for a decent price and then researched how to make them myself / what the difference was between aquarium plants and regular silk plants.

The difference is the metal and that's about it. Maybe some dyes leaching out of some kinds, but I would look at what my local craft store had and worry about the dyes after I found out what they had to offer.

Picked up some nice plastic grassy pieces for $7 each, and one leafy type just for variation. After a horrible catastrophe involving silicone and pebbles, I got frustrated and tried it another way.

Eggcrate shoved into a basket and then sunk into the pond. It worked! It worked so well I'm going to build a PVC structure with eggcrate attached and add more plants along the other wall.

Pictures to follow of this fantastic discovery. Woo! I think it looks really nice and it'll give the fish someplace to hide and play in. 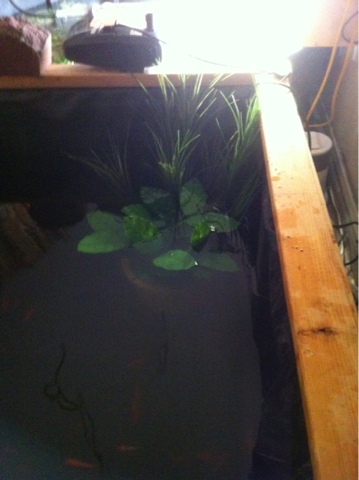 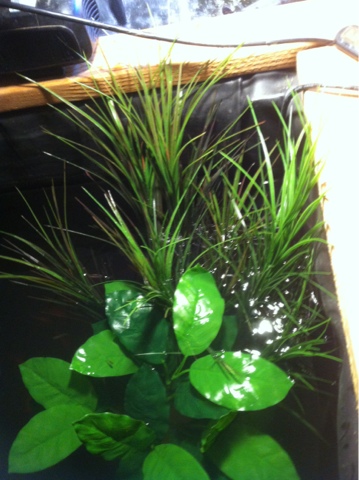 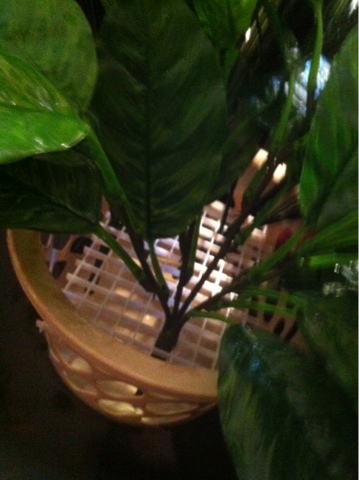 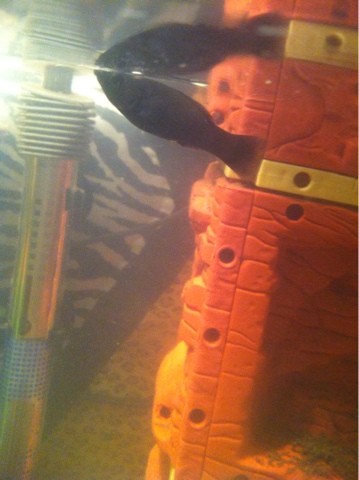 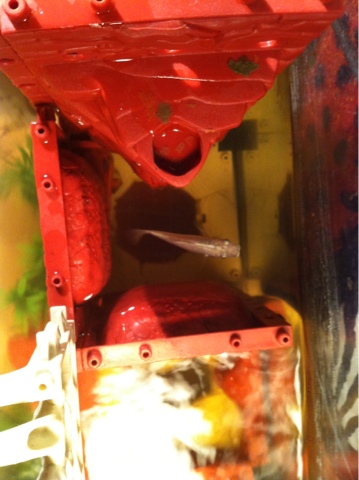 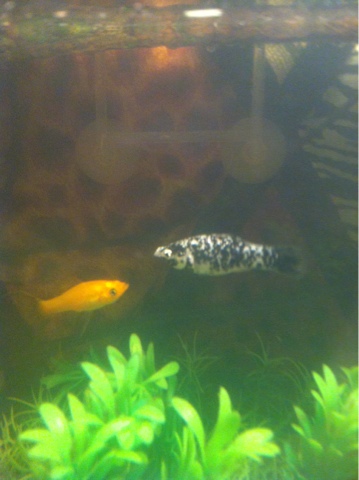 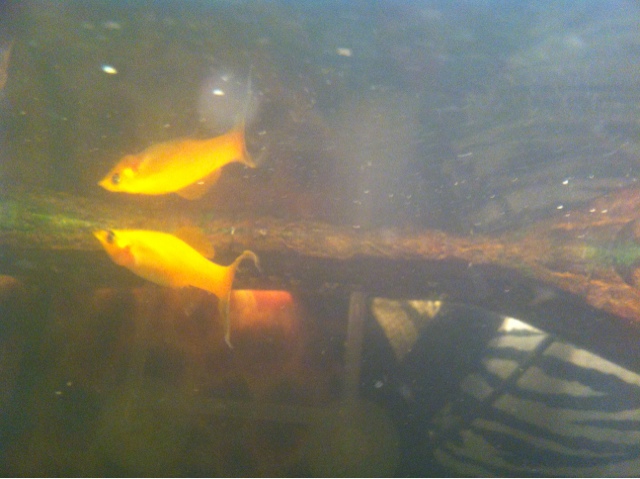 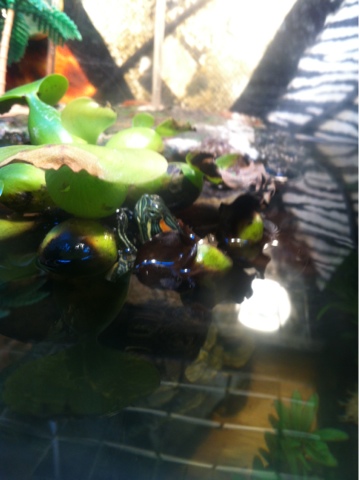 
Need name ideas for my ponds:

(A) I have one round, 300 gallon, plastic Rubbermaid tub for the big turtles.
(B) I have a wooden, rectangle, 250 gallon pond for the small turtles and the fish.
(C) I have a 55 gallon aquarium inside the house with a palm tree on the basking area and a castle cave and a firetruck that houses Captain Pleco, Spotty Fish (and two babies), and Baby Timmy.

I can't think of any names for them.